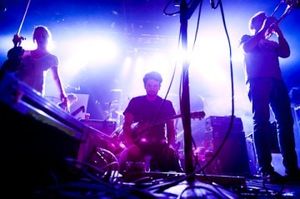 New York Times: “A sprawling kaleidoscopic invocation of the life force with songs that veer from jubilation to simmering prayerful meditation.”

Rolling Stone: “The instrumental arsenal of the Arcade Fire mixed with the gentle electronic throb of the Postal Service.”

Denver Post: Top 12 Albums of the Decade- “It’s impossible to not be moved…”

-----------------------
Short Bio: Cloud Cult began as Craig Minowa’s solo studio project, and over the course of ten studio albums the band has grown with an evolving lineup of musicians.  Cloud Cult's philosophical lyrics and hybrid orchestral rock sound has brought the band accolades including New York Times, Entertainment Weekly, Pitchfork and NPR. The band has had several albums at the top of the North America college radio charts and has declined major record label deals in favor of staying independent. Cloud Cult's industry-leading environmental practices led to Rollingstone ranking the band in the Top 10 greenest bands.

The Cloud Cult band is:

Cloud Cult has a more than two-decade long career and have remained staunchly independent throughout, finding success on their own terms and earning critical praise over the years including recent features by NPR’s On Being, Entertainment Weekly and KCRW for their latest studio album and feature length film The Seeker which stars Josh Radnor and Alex McKenna.  The powerful emotional journey that this album and film take you on fits perfectly into Cloud Cult’s extensive catalogue that includes nine other full-length studio albums, Unplug – a live album and film, No One Said It Would Be Easy – a documentary film and Stories From the Road – a series of short films.  The common thread through what Cloud Cult does as a creative collective is their uplifting message, continual celebration of life and love and catharsis through music.

In addition, the band’s green efforts are unmatched.  Cloud Cult’s founder Craig Minowa and his wife Connie formed Earthology in 1999, a 501c3 not-for-profit organization focused on providing individuals, schools, and business tools for environmental sustainability.  Minowa created the Earthology Records branch to help green the music industry and co-developed the first 100% postconsumer recycled CD packaging in the U.S. market.  The band began zero net greenhouse gas practices for tours long before it was trendy and their merchandise is 100% postconsumer recycled or made of certified organic materials.  On top of that, Cloud Cult has planted several thousand trees to absorb the band's CO2 output, their studio is powered by geothermal energy and built partially from reclaimed wood and recycled plastic and they donate heavily to projects that build wind turbines as revenue generators on Native American Reservations.

The band has toured consistently throughout their career and their shows always feature live painters on stage, a longstanding tradition for the group (read more about that HERE Wall Street Journal).  This past year, they played live along with The Seeker and in 2018 they have two shows with the Minnesota Symphony Orchestra – that sold out in record time. To stay up-to-date with Cloud Cult please visit www.cloudcult.com.

Long Bio:
Cloud Cult developed in 1995 as a solo studio project of Craig Minowa. His first full length album, The Shade Project caught the interest of a few small independent labels who urged Minowa to consider performing the songs live. Craig worked the next four years on a new studio project which would be the first official Cloud Cult album, Who Killed Puck?.

In 1999, lead singer Craig and Connie Minowa formed Earthology, a 501c3 not-for-profit organization focused on providing individuals, schools, and business tools for environmental sustainability. Craig worked on developing the Earthology Records branch, which  was focused on helping to green the music industry.  Earthology Records, based at the time in Duluth, MN, would become the homegrown powerhouse where all of the band's booking, publicity, CD replication, t-shirt production, and recording would take place. Through Earthology, Minowa co-developed the first 100% postconsumer recycled CD packaging in the U.S. market.

Earthology Records was later moved to an organic farm south of Duluth, powered by geothermal energy and built partially from reclaimed wood and recycled plastic. The band began zero net greenhouse gas practices for tours long before it was trendy to be green. The band's merchandise is 100% postconsumer recycled or made of certified organic materials. Cloud Cult has planted several thousand trees to absorb the band's CO2 output. They also donate heavily to projects that build wind turbines as revenue generators on Native American Reservations.

In the year 2002, shortly after the unexpected death of his two year old son Kaidin, Minowa wrote over a hundred songs to deal with the loss.They Live on the Sun was finished in 2003 and went to #1 on college radio station charts across the country. Since that album, Cloud Cult's music has been strongly inspired by the "big picture" issues of life:  "who are we, why are we here, where did we come from, where do we go". Minowa seems in constant pursuit of the light at the end of the tunnel. At this time, Minowa decided to bring the project to the stage and added band members Sarah Young on cello and Dan Greenwood on drums. 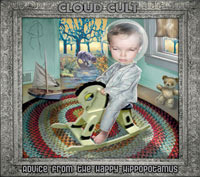 In 2004, the band released Aurora Borealis, which garnered enough critical acclaim to get the band nominated by the Minnesota Music Awards as “Artist of the Year” along with Prince and Paul Westerberg of The Replacements. With a van covered in solar panels, the band added Mara Stemm to the lineup on bass and began touring nationally. Cloud Cult's stage show began to catch the attention of national press, as they included two live painters on stage, Connie Minowa and Scott West, as well as back screen video and performance artists.

In 2006, Cloud Cult released Advice from the Happy Hippopotamus, which Pitchfork Media called “insane genius” and rated the album with an 8.3.

The Denver Post ranked the 2007 release The Meaning of 8 as one of the top ten albums of the past decade, along with bands like Modest Mouse, The Flaming Lips and Radiohead. Cloud Cult received several offers from major record labels, but all were rejected in favor of self-publishing and maintaining total control over the ethical aspects of the Cloud Cult business practices.  Shannon Frid joined the lineup on violin, Mathew Freed replaced Mara Stemm on bass, Jeff D. Johnson joined the group as sound engineer and road manager and Adrian Young took on band management. 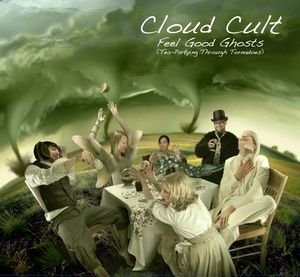 Cloud Cult released the album entitled Feel Good Ghosts (Tea-Partying Through Tornadoes) on April 8, 2008. As with the past Cloud Cult albums, the album was recorded and produced at Minowa’s small organic farm in Northern Minnesota. "The place is so far out in the boonies, you can barely find it, because it’s not on the maps," said Dan Montalto, an MTV Producer who brought a camera crew to the farm to film a short MTV feature on the band.

In October 2008, Cloud Cult was featured in an animated Esurance commercial that aired during the Super Bowl. The band is shown playing their song "Lucky Today" while floating on clouds and promoting ecological driving practices. In exchange for the work, Esurance helped fund some of the band's costs for greening the Feel Good Ghosts Tour. During 2008 and 2009, the band's growth continued, with a heavy tour schedule and appearances on MTV, Carson Daly, Rolling Stone, Spin and a plethora of other media outlets. Arlen Peiffer replaced Dan Greenwood on drums and Shawn Neary joined the group on bass.

In the Spring of 2009, Cloud Cult released No One Said It Would Be Easy a full length documentary about the band, created by John Burgess and Scott West as well as "Lost Songs from the Lost Years" a collection of previously unreleased songs spanning the band's 15 year history.

The band took up touring again with the 2010 release of Light Chasers, which was an elaborate concept album about the lifelong spiritual quest. The album's strong orchestral elements laid on electronic beds paralleled the music Minowa was composing for films at that same time, including a dozen National Geographic documentaries and other independent films. In order to cover the brass arrangements on stage, Sarah Perbix joined the group on French Horna and trumpet and took over keys from Minowa on stage. Sarah and Adrian Young retired from the band. Minowa resumed managing the band and Daniel Zamzow took over on cello.

The band released a new full length album on March 5, 2013, entitled Love which charted higher on the Billboard Charts for Cloud Cult than any of their previous albums. Co-engineered by Jeff D. Johnson, the album brought the band on a string of sold out US tour dates.

Cloud Cult released a new full length live acoustic album and concert film, Unplug, on April 15, 2014. It was produced and mixed by Jeff D. Johnson and mastered by Jeff Lipton (Bon Iver, Arcade Fire). While the songs were all pulled from the band’s existing discography, the versions on Unplug are quite different than the album versions as Minowa said the album was more of a collaborative process than any of Cloud Cult's previous discography. The goal of the project was to take what had become an incredibly elaborate and technical stage setup and reduce it back to something that could be done unplugged in the middle of the woods or in someone's living room. The songs were chosen by their lyric content as a distillation of the philosophies from all of the past albums. During this time, Jeff D. Johnson continued his new role in Cloud Cult filmmaking by producing a series of films focused on the stories of Cloud Cult fans the band had met on tour, called Stories from the Road. In this series, Cloud Cult shifts the spotlight away from the band and onto the fans. Each of the stories focuses on individuals who have overcome incredible obstacles in their lives and instead of being crushed by the struggle, they chose to bring beauty to the planet in the process.

Over the next couple of years, Cloud Cult made their European debut, added Jeremy Harvey on drums, won an Emmy, were featured in a new biography book called Chasing the Light by Professor Mark Allister, and they released their newest album The Seeker in February of 2016. The album has been lauded by critics as the band's best work to date. The album was also made into a feature length film, starring Josh Radnor and Alex McKenna, written and composed by Minowa and directed and visually scored by Jeff D. Johnson and his film company Motion 117 Productions. The Seeker became an award winning film as it toured the film festival circuit in late 2016. To promote the digital release of The Seeker on iTunes, Google, Amazon and Vimeo, Cloud Cult announced a string of US tour dates where the band will be performing the full score of The Seeker as the movie plays on screen.